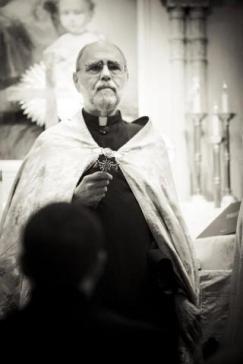 Archpriest Antranig Baljian was born in Worcester, Mass., in 1950 with the baptismal name of Nishan. He received his elementary and secondary education in the city of his birth, after which he studied at Assumption College, where he received his Bachelor of Arts in 1972. From 1972-74 he studied in the Seminary of the Catholicossate of the Great
House of Cilicia. In May 1974 he was ordained into the diaconate in the Grand Cathedral of Antelias at the hand of Archbishop Ardavazt Terterian, the dean of the Seminary.

In September of 1974, Fr. Antranig was installed as the secretary of St. Stephen’s Armenian Apostolic Church of Watertown, where he served also as a deacon and pastoral assistant to Archpriest Torkom Hagopian. In 1975 he was married to the former Cheryl Arpineh Depoian, a childhood friend from Worcester.  In May of 1976 he was ordained a priest at the hand of then Archbishop Karekin Sarkissian of blessed memory (later Catholicos of Cilicia and then of All Armenians) who renamed him “Antranig” (First born) as the first American-born Armenian priest of the Catholicossate of Cilicia. Der Hayr became the pastor of St. Gregory the Illuminator Armenian Apostolic Church of Indian Orchard-Springfield, MA where he remained for almost 19 years.

In 1978 Fr. Antranig was elected a member of the Religious Council of the Prelacy of the Armenian Church and served for four years, first as advisor, and then as secretary. From 1980 to 1996, Der Hayr was the chairman of the Armenian Religious Education Council of the Prelacy. In September of 1994, Der Hayr’s career in the priesthood came full circle as he was appointed pastor of St. Stephen’s Armenian Apostolic Church of Watertown, MA, replacing his retiring mentor, Archpriest Torkom Hagopian Yeretzgin Cheryl Arpineh is an elementary school teacher in Winchester, MA, where her fourth grade class continues to score in the highest percentile for standardized state testing. Yeretzgin is also a dedicated member of the St. Stephen’s choir and a frequent contributor and Copy Editor for St. Stephen’s quarterly JRAK newsletter.