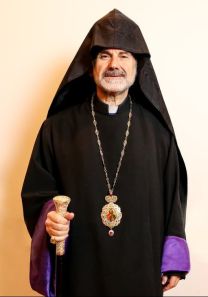 Archbishop Anoushavan (baptismal name, Torkom) Tanielian was born in Beirut, Lebanon, in 1951. He graduated from the Armenian Theological Seminary in Antelias, Lebanon, in 1971, and was ordained in 1972. He continued his higher education and received degrees from the Near East School of Theology (MDiv 1983), Princeton Theological Seminary (ThM 1985), and Columbia University (MPhil 1992, and later PhD in 2003).  He was consecrated a bishop on June 4, 2006, by His Holiness Aram I, Catholicos of the Great House of Cilicia, and later, Archbishop on November 23, 2018 soon after becoming Prelate of the Eastern Prelacy.

Over the last four decades Archbishop Anoushavan has served the Armenian Church in various capacities, including in Lebanon (1972-1984) as librarian and instructor at the Theological Seminary of the Holy See of Cilicia, the “Hamazkayin” Armenological Institute, Mardigian and Garmirian schools; spiritual counselor to the Armenian Church University Students Association (ACUSA), and as a social worker representing the Catholicosate at the Armenian Charity Organizations Union during the civil war. In the United States (1984 to present) he has served as preacher at St. Gregory the Illuminator Church in Philadelphia and at Sts. Vartanantz Church in New Jersey; as pastor of St. Sarkis Church in New York, also served as Vicar General of the Eastern Prelacy and Ecumenical Officer in the United States for the Catholicosate. He was the founding director of the St. Gregory of Datev Summer Institute (1987-2011) and continues to serve as an instructor. He has lectured at the Prelacy’s Siamanto Institute and the Hovnanian School in New Jersey.

Archbishop Anoushavan is the author of several translations of Armenian Church Fathers’ oeuvres from classical Armenian into modern Armenian and the editor of the translation into Armenian of Kahlil Gibran’s The Prophet. His monumental work is the Catalogue of the Manuscripts of the Armenian Catholicosate of Cilicia (1984). In December 2007 his doctoral dissertation was published, introducing the life and work of the 12th century Armenian theologian and author, Archbishop Nerses Lambronatzi’s Commentary on the Wisdom of Solomon.